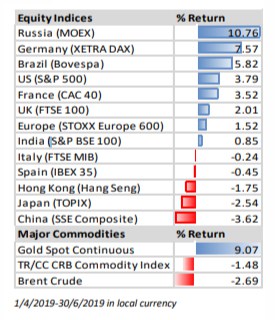 At the start of the second quarter the question on many investors’ minds, was would markets be able to retain the momentous gains accrued in the first quarter. Markets have not disappointed, with most global equity markets not only retaining their earlier gains but, in many cases, advancing further. The US S&P 500 index added close to 4% over the quarter, whilst notching up new alltime highs along the way. The UK market was slower to recover, the FTSE 100 index is still below the highs reached in May last year, however, it still added 2% in the second quarter. European markets were also positive with the Euro STOXX 600 index gaining 1.5%. Japan and China were the notable exceptions, with China declining around 4%, not helped by the ongoing US China trade war, whilst Japan, also affected to some extent by trade concerns and impeded by a strengthening yen, declined by around 2.5%.

The second quarter was not only positive for equity markets, gains could also be found in the bond markets, with the prospects of further accommodative monetary policy on a global scale providing a tailwind for most risk assets. Gold gained 9% over the quarter, with inflows again been driven by expectations of more dovish monetary policy, as lower interest rates reduce the opportunity cost of holding non yielding assets.

The synchronised global growth that has prevailed over the last couple of years is now showing signs of divergence, as countries affected by trade tensions, such as Germany and Japan, are beginning to feel the pain in their manufacturing sectors. At the same time however, low unemployment and a pickup in earnings are supporting household incomes and consumption. Overall, global growth has been falling and future projections have also been softening, although there are signs that this decline in expectations is bottoming out. Similarly, forecasts for UK growth were revised up from 0.8% to 1.2%. The OECD however, does see growth dropping off again in 2020, as the effect of tax cuts and stimulus in the US drop off and Brexit hampers UK economic output.

Looking ahead there are, as always, both reasons to be positive and reasons to be negative on the outlook for markets. Corporate earnings continue to be encouraging, although expectations have fallen recently there is still reasonable growth expectations for global equities. Valuations are again are above their long-term averages, so it is difficult to see how markets can advance much further without growth expectations also ticking up. Political tensions and uncertainties remain significant which can lead to volatile movements as the news flows evolves, however this is often more of a short-term reaction and markets have a habit of quickly looking beyond this and reverting.

One of the biggest drivers of late has been the central banks who now seen unanimous in, their proactive stance ahead of a slowdown as opposed to what has traditionally been reactive after an event. This is likely to be a tailwind for equities, and again we have clearly seen evidence of this, when there has been the slightest hint of growth easing central banks have stepped in with the prospect of looser monetary policy sending risk assets soaring.

Longer term however, it does give cause for concern on a number of fronts. Firstly, central banks now have limited firepower, particularly in Europe, Japan and the UK, and if this is used when growth is merely softening, what ammunition is left to fight a true recession.